The Woman
WE L♥VE Series
~

*I Proud To Recommended!!!*

There’s just something about a girl who plays guitar. When that girl also sings with passion and writes some quality songs, the impression resonates even more. With her debut album, Don't Look Away, twenty-one year old singer/songwriter Kate Voegele exceeds all such criteria, signaling the arrival of a promising new artist.

With qualified craft and conviction, Voegele imparts an astute pop sensibility while, at the same time, enveloping the energy of rock and roll. Her voice compares to those of contemporaries like Michelle Branch and Anna Nalick, yet Voegele’s overall sound – vocals and music – suggests some veteran and sonically edgier influences. Thus, one can hear traces of Fleetwood Mac and Linda Ronstadt, but also of Pat Benatar and Heart. In her own way and when she’s at her most affecting, Voegele offers what such predecessors delivered in their relative primes: songs as solid in composition as they are in expression.

The tracks that best achieve this balance are ones with well-defined melodies or hooks, as well as strong, compelling vocals. On rockers like “Might Have Been” and “I Get It,” Voegele sings with sass and assertion, her voice matching the intensity of their punchy, guitar-driven grooves. She demonstrates soulful and emotional depth on “I Won’t Disagree” and “Kindly Unspoken,” both songs sobered by a piano’s melancholic tone. And with “Top of the World,” she parlays comparable depth yet with layered harmonies and more rhythmic intimations.

Her creative diversity and versatility pay off the most on “Only Fooling Myself” and “It’s Only Life,” which respectively combine melodic and harmonic elements of pop with the thrust and substance of rock to yield equally stirring and powerful performances.

With Don't Look Away, Kate Voegele has begun to carve out her own niche as a unique singer/songwriter. She exhibits confidence grounded in talent, ambition, and effort. Such attributes make for an impressive debut album and suggest even better music to come.

Don't Look Away, Voegele's first full-length album (MySpace Records), is a revelation, as the 20-year-old writer/singer, belying her tender years, delivers songs of depth and insight with a powerfully seductive voice that maintains a fierce presence amid dynamic rock grooves and infectious pop hooks.

Produced by the veteran Marshall Altman (Matt Nathanson, Mark Broussard), Don't Look Away is a bravura effort from an old soul with a youthful spirit; think of her album as a female parallel to John Mayer's Room for Squares-at once a zeitgeist-capturing landmark and the launchpad for a viable career.

The tracks range from the rootsy acoustic ballad "Wish You Were," with its mandolin and accordion filigree, and the sparse, piano-based "Kindly Unspoken" to the widescreen heartbreak anthem "Only Fooling Myself" and the ironically titled "It's Only Life," a soaring expression of female empowerment, which Voegele describes as "a motivational, uplifting song about dealing with situations rather than trying to hide from them."

"One Way or Another" is an edgy rocker about romantic victimization, while the punchy "Chicago," she says, "is a metaphorical representation of any kind of escape, about just needing to get away. The line at the end of the chorus is, 'I'll be on the seven o'clock to Chicago,' so it refers to a specific city, but it's universally applicable."

Kate Elizabeth Voegele (born December 8, 1986) is a singer, songwriter, guitarist, and pianist from the Cleveland suburb of Bay Village, Ohio, United States. Voegele attended Miami University in Oxford, Ohio through spring of 2007 as an Art Education major, leaving to focus on a music career afterwards. Voegele’s band includes Sam Getz (of Cactus 12) on guitar, and Mark Tobik on bass.

Voegele began gaining interest from record labels and management companies after recording a series of demos. The first demo “The Other Side” (released in 2003) was produced by multi-platinum, award winning producer Michael Seifert. Her second demo “Louder Than Words” (released in 2004) was produced by Marshall Altman. Kate signed a record deal with Myspace Records in 2006 and released her debut album “Don’t Look Away” (produced by Marshall Altman) in May of 2007. 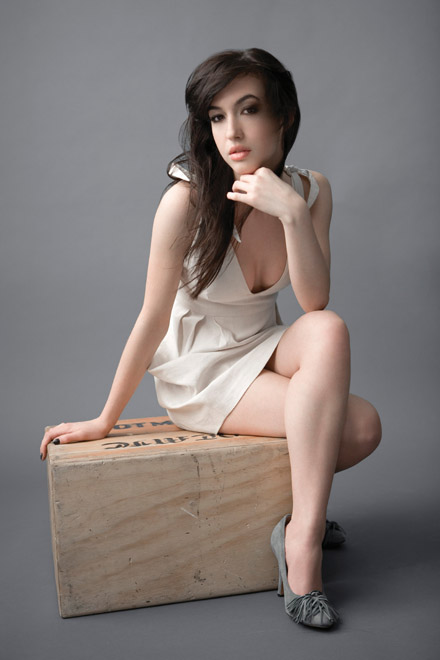 Kate Voegele recently began a recurring guest spot in six episodes of The CW television series “One Tree Hill” on Tuesday, January 22, 2008. Voegele plays Mia, a young singer and keyboardist for a rock band fronted by Jason (Kevin Federline). After Peyton (Hilarie Burton) signs the band to her upstart record label and becomes increasingly frustrated with Jason’s attitude, she eventually drops him and the rest of the band, but retains Mia as a developing new artist at the insistence of Haley (Bethany Joy Galeotti), who is somewhat well-versed in the music industry as well.

KATE VOEGELE IN PLAYLIST
EVERY WEEKEND ON

Every Saturday at 8pm. Bkk, Thailand time, throughout the rainy season on Mixpod and right here at theportastylistic.blogspot.com. Visit to My Fair Lady Night*+live Special Series

"Surly one of the most,
woman spotlight
SUPER ROOKIE!!!
suggest even better music to come."