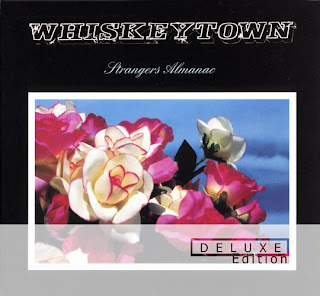 "...show's range beyond the band's trademark roughhouse, twang-tinged punk, but its honky-tonk heart still beats..."
STRANGERS ALMANAC was Whiskeytown's penultimate album. The band is still steeped in the sounds of country and Gram Parsons-inspired country-rock here, but one can hear the music moving toward the pop of their final effort PNEUMONIA. Everything still centers around the voice and excellent songwriting of Ryan Adams (who was still only 22 at the time of this album's release).
The song "16 Days," for example, with its breezy, open-road, country vibe and the lovely interlocking harmonies between Adams and violinist Caitlin Cary, was released as a single, and rightfully so. There is also the beautiful, melancholic weeper "Dancing With the Women at the Bar," and a revisitiation of "Excuse Me While I Break My Own Heart Tonight," which appeared on the band's debut.
Adams's talent shines so brightly here, in fact, that it is little wonder he would soon be pursuing a solo career (the internal tensions in the band would hasten its dissolution as well), but STRANGERS ALMANAC captures this fine, short-lived, alt-country band in full effect.
Selectory by THE PORTASTYLISTIC at 7:28 PM