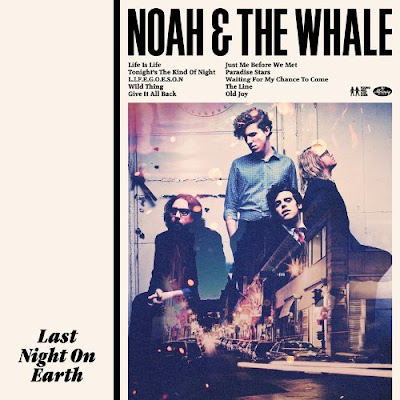 Full disclosure: I am actually a sucker for the whistling, uke-strumming, hand-jiving, oversaturated super-8 montage, matching-outfits twee of Noah and the Whale's breakout single "5 Years Time". Which I guess makes me part of the reason this crap winds up in car commercials. Sorry. But that song was animated by exactly how close it crept up to the line of preciousness without tumbling into full-on Pomplamoose territory, and even if it was only a trifle, nothing else on their first two albums came close to its sugary stickiness.

In fact, Noah and the Whale's sophomore album, The First Days of Spring, deliberately turned away from that sort of thing, opting instead for a glummer, stripped, and slowed-down acoustic sound. If both these albums relied on a certain hand-crafted feel to derive their small charms, new album Last Night on EarthThe First Days of Spring was their Science of Sleep (maudlin, sluggish), then the new album is their Green Hornet in 3D-- although that would all assume they had Michel Gondry's appeal in the first place.

The change is immediately apparent on opener "Life Is Life"; the song begins with a lapping synth arpeggio and drum machine sputters before building up to big buzzing synth chords, echoing grand piano, and-- why the hell not?-- a gospel choir. Everything that follows is equally blown up, and the arrangements are frequently lovely, but the songwriting at the center of it all doesn't exactly merit such widescreen treatment. Over obvious changes and neatly resolving chord progressions, bandleader Charlie Fink sings stock rockisms and bland platitudes: "Tonight's the kind of night where everything could change"; "baby, she's a wild thing"; "you got heart, and you're going your own way." Fink's singing is fine, but he's abandoned the folksy British accent audible on the band's early albums to settle into a kind of vast, unremarkable singer-songwriter flyover country.

At its best, and on lead single "L.I.F.E.G.O.E.S.O.N.", Fink aims for a kind of Tom Petty story-song vibe, with broadly painted characters ("she's a rock and roll survivor with pendulum hips") and a classic Americana sense of the possibility in the great wide open, even one littered with cautionary tales. The first half of the album is written almost entirely in third person narratives, and it begins to give the album the feel of a world looked at not through its protagonist's eyes but through a camera's lens. This trick holds up enough so that when the album shifts to first person on the flipside, it feels like Fink is inhabiting roles rather than just spilling his own guts.

Even at their best, though, Noah and the Whale struggle to overcome a trying-too-hard odor that permeates everything they do right down to that ill-advised band name. Here, they've lost both the rinky-dink whimsy of their debut (save for a little xylophone melody on "Give It All Back") and the subdued strength of its follow-up, splitting the difference to arrive at an album that's as artfully inflated as it is vacuous and forgettable. Believe it or not, it may actually make you yearn for the simpler times of "fun fun fun" in the "sun sun sun."

*I Proud To Recommended!!!*
"Creative wanderlust!" 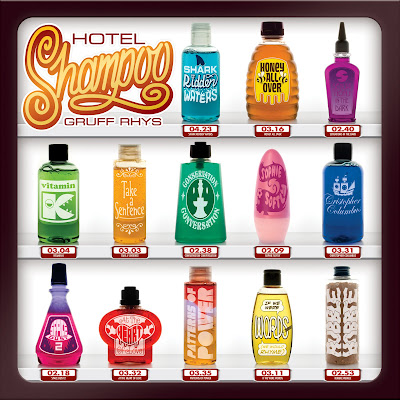 Enjoying the more eccentric quarters of Gruff Rhys's colorful back catalogue hinge's on one's tolerance for his loose wordplay and peculiar themes. Rhys's last departure from Super Furry Animals, a culture-colliding collaboration with Brazilian VCR repairman Tony da Gatorra, was perhaps his most off-the-wall effort to date, packed to the gunwales with influences and ideas that would have been best left on the cutting room floor. Hotel Shampoo, then, catches the plucky Welsh songster in a mercifully modest mood, and is replete with comparatively straightforward songwriting and some surprisingly charming couplets.

But, as ever, there's nothing totally straightforward about any album bearing Rhys's name: He markets his latest as an attempt to "buy a suit and record an album of piano ballads," neglecting to mention his affinity for sprightly mariachi brass sections and a newfound penchant for über-sexy saxophone solos. And while this could be the closest Rhys ever comes to making a truly "mature" album, his quirky personality and giddy experimentation are still very much at the fulcrum of Hotel Shampoo. God forbid he ever grows up completely.

Given that Rhys has restlessly toured the globe for over a decade, and having recently spent an extended period of time in Patagonia last year tracing his estranged relatives, it's no surprise that his music incorporates a broad range of sounds. That Hotel Shampoo doesn't sound messy is a marvel in itself, for this album exists in cultural and stylistic limbo. One minute we're bouncing to "Sensations in the Dark" (an exotic jaunt with steel pans and mariachi horns lifted from Super Furry Animals's "Northern Lites") and the next we're sucked into "Vitamin K," a pensive nouveaux chamber-pop song complete with one of those aforementioned saxophone breaks and some superb tremolo cello work. "Shark Ridden Waters" plays like a spacey pseudo-Bond theme, an unruffled psychedelic number plucked from any decade in any galaxy you care to imagine. Rhys always seems comfortable in any environment he chooses to lay his scene, but refuses to settle into any particular sound throughout the course of the album.

Thematically, too, Rhys plays fast and loose with whatever tickles his fancy: "Space Dust #2" may represent the very peak of his storytelling prowess, as he spins an enticing yarn of star-crossed lovers falling for each other—and then gradually drifting apart—at a science conference. Sarah Assbring, the endlessly talented Swedish pop prodigy behind El Perro del Mar, is the Juliet to Rhys's everyman Romeo, and the pair trade call-and-repeat lines atop a honeyed matinée melody: She bemoans "You upped and left without warning," to which he nonchalantly replies, "I had to work in the morning." This track is full of pert witticism, and the two establish a fantastic repartee that will all but erase memories of Rhys's overblown jousting with de Gatorra last year.

Hotel Shampoo strikes a happy medium between Rhys's two personas. Here, he paces up and down his recording studio like a mad scientist at one minute, and playing the modish master of the lounge ballad on the other. Many of these tracks could well have featured on any Super Furry Animals record, but there's no question that they're also right at home here. Hotel Shampoo is terrific, neatly channeling all of Rhys's wonderful eccentricities into an intelligent pop record.

*I Proud To Recommended!!!* 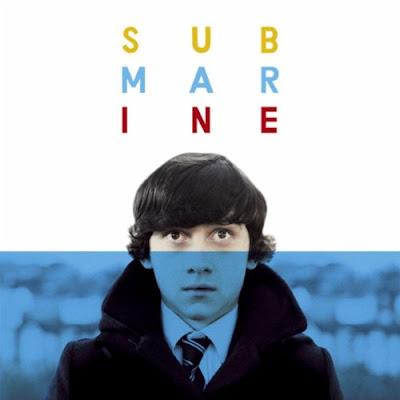 Bright eyed, tousle-headed, with a look halfway between penitence and innocence, Submarine star Craig Roberts stares back at you from the cover of Alex Turner's soundtrack to the buzzy indie comedy. The two make quite a pair; young Roberts looks a bit like Turner did when we first met him and the Arctic Monkeys five years ago. But Turner's not a young man anymore, and over the years, the the cynical smirk with which he greeted everything on those early Arctics records has threatened to turn to a scowl. On title alone, the forthcoming Arctic Monkeys album Suck It and See doesn't offer much confidence that above-it-all hasn't finally given way to fuck-it-all. But the songs he's written for Submarine-- the story of 15-year-old Roberts navigating the cusp of manhood-- find Turner sounding more revived, more assured, and in a sense, more himself than he has for some time.

Submarine collects five and a half new Turner songs-- a few lilting ballads with minimal adornment, and a couple of mid-tempo pop tunes often calling to mind the spare, stately beauty of Turner's countryman Richard Hawley. It's a brief, fairly unassuming set, pulling back on both the Monkeys' linguistic barrage and the symphonic flourishes that Turner and Miles Kane deploy in the Last Shadow Puppets. He's long been an ace at the narrative lyric, unspooling yarns into tangled, cutting slices-of-life. But with the film providing the storyline, Turner's lyrics tend toward impressionistic details and wallflower observations, filling in the picture rather than trying to retell the script in song. Though some of these stray lines can feel a bit adrift without a plot, Turner's keen wit and eye for detail coalesces into a tender portrayal of that resolute adolescent uncertainty, of figuring things out as they go.

Highlight "Hiding Tonight" succinctly captures that uniquely teenage feeling that tomorrow is bound to be transformative, so worry can wait. "Glass in the Park" sounds like a lazy afternoon between two young lovers, whispering impossibly grand promises to each other. "It's Hard to Get Around the Wind" is a touch more inscrutable, a Dylanesque puzzler that touches on desert spoons, X-Men pinball, and coming to terms with fate. Here, the images get a bit tough to follow line for line, but the overarching notion that we're forced to accept some things we don't understand comes through clearly enough. "Stuck on the Puzzle" is the set's most musically straightforward track, with a fuller sound bolstered by psych-pop flourishes. Closer "Piledriver Waltz" tells an odd tale of breakfast at the Heartbreak Hotel and reminding someone, "If you're gonna try to walk on water, make sure to wear your comfortable shoes." "Waltz," which Turner intends to revive on Suck It, proves the set's lone dip in quality; its parade of images is a tad too clarity averse, although it gets by on the constant motion of its melody.

Matched to this sophisticated, admirably restrained music, Turner's SubmarineHumbug and the early Suck It songs, Submarine's rich, reminiscent tone finds Turner sounding very much at ease with himself and his talents, offering a swift but satisfying glimpse at that same charming, circumspect young man we knew back when.

Email ThisBlogThis!Share to TwitterShare to FacebookShare to Pinterest
Portagories: Favorites, Found Objects, Indie is In, Music