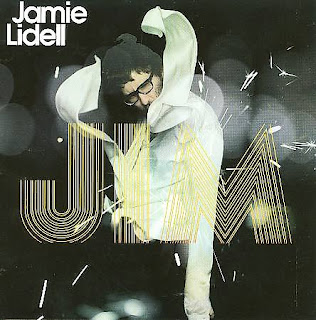 "It's another welcome surprise."
The follow-up to 2005's excellent, endlessly re-playable MULTIPLY, JIM finds Jamie Lidell delving even deeper into the classic soul and R&B feel that characterized much of that album.
Although JIM bears the unmistakable sonic gleam of an album crafted by an artist weaned on electronica (Lidell began his career creating glitch-hop and remains on the Warp roster), the burbles and clicks are blended into an overall m.o. that kneels at the altar of Stax/Volt and Atlantic Records circa the 1960s and early `70s.
But while the ghosts of Otis Redding, Sam and Dave, and Wilson Pickett loom large here, JIM is far from mere retro rehash.
For starters, the disco, funk, electronica, and contemporary club flourishes are folded so carefully into the mix that they might be easy to miss-but they're indeed there. But more important is Lidell's superb songwriting and production, to say nothing of his amazing singing.
A beautifully crafted set that pushes old- and new-school buttons with equal skill, this is the sort of record that is flat-out hard to dislike.
Jim now suggests otherwise: This is an album by an artist getting comfortable with his softer side.
Selectory by THE PORTASTYLISTIC at 1:13 AM